You Are Here: Federal President Steinmeier on RWTH Aachen Campus at his inaugural visit to North Rhine-Westphalia 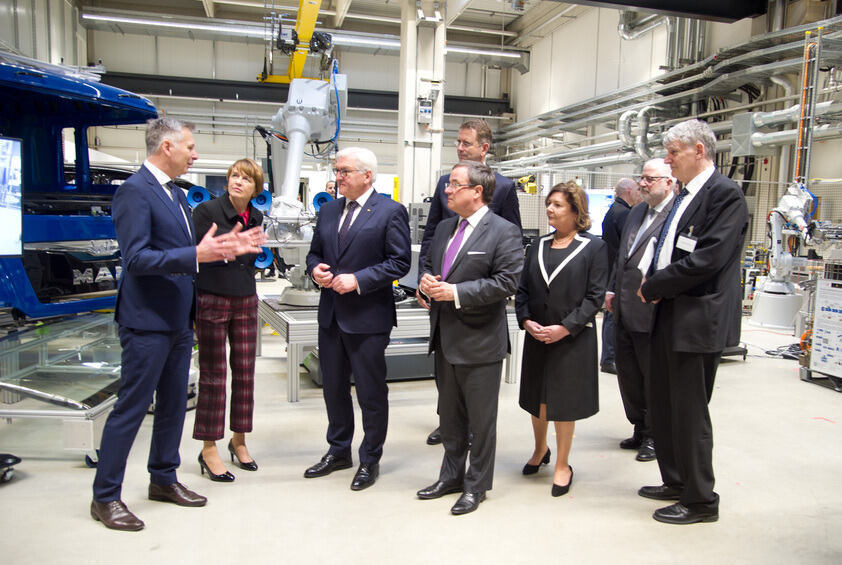 Federal President Frank-Walter Steinmeier, accompanied by his wife Elke Büdenbender, came to North Rhine-Westphalia on March 12, 2018 for his official inaugural visit. Alongside the North Rhine-Westphalian Minister President Armin Laschet and his wife Susanne Laschet, as well as Prof. Ernst Schmachtenberg, Rector of
RWTH, and Prof. Günther Schuh, Managing Director of the WZL, they visited the Laboratory for Machine Tools and Production Engineering (WZL) of RWTH Aachen University, and the electric car developer e.GO Mobile AG in the Production Engineering Cluster on RWTH Aachen Campus.


The University of Excellence RWTH Aachen with its Campus project is an impressive example of how close cooperation between science and industry can generate real innovation. With success stories like the StreetScooter and the e.GO Life, North Rhine-Westphalia has the potential to drive progress in e-mobility. RWTH is a pioneer in this field, opening up new avenues of development in the transition to sustainable transportation. Innovation comes from North Rhine-Westphalia and not just California.


The Production Engineering Cluster on RWTH Aachen Campus is one of the largest research laboratories for production engineering and Industrie 4.0 in Europe. For more than a century, the Laboratory for Machine Tools and Production Engineering (WZL) of RWTH Aachen, initiator of this cluster, has enjoyed a global reputation for its pioneering research and highly successful innovations in the field of production engineering. During their visit to the WZL, the guests got an insight into the Chair of Production Metrology and Quality Management – one of four
departments in the WZL – by Prof. Robert Schmitt, Director of the WZL. The institute is also involved in the development of the e.GO Life electric car.


RWTH Aachen is preeminent among the many universities and scientific institutions of North Rhine-Westphalia, thanks among other things to its important contribution to e-mobility. Researchers here are doing what conventional car manufacturers claimed was impossible: building electric cars at reasonable prices. I am very excited to hear what happens here in future.