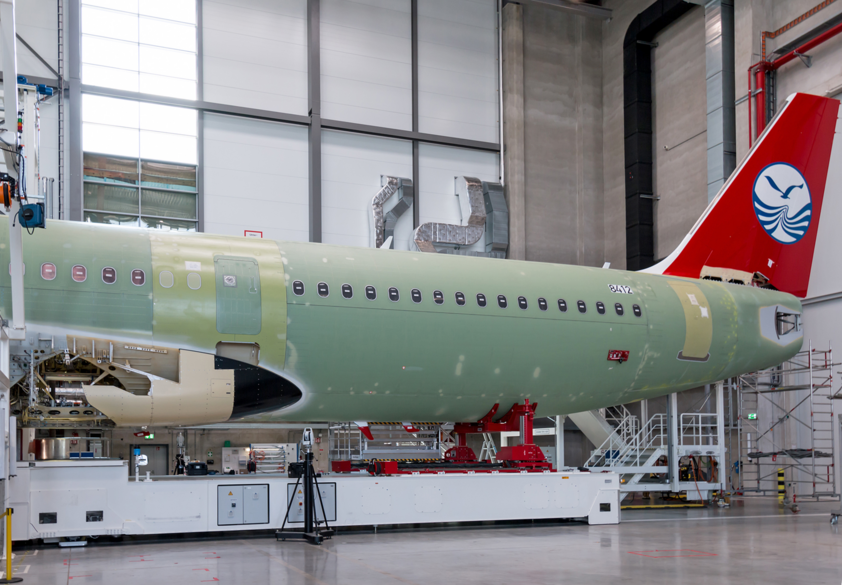 Copyright: © Airbus Measurements on the aircraft fuselage with a laser tracker

In final aircraft assembly, high-precision position data form the basis for checking tolerances in the sub-millimeter range over component dimensions of up to 50 meters in order to meet the high-quality requirements in aviation. A large number of positions distributed over different components of the aircraft on external surfaces and in the internal cabin area have to be measured. The WZL subproject in the BMWi-funded iVePSA project was concerned with the goal of providing high-precision position data for aircraft final assembly processes throughout the factory. The project ended in September 2021 after three and a half years and collaboration with the partners Airbus, Advanced Realtime Tracking, Fraunhofer IFF, Siemens, TWT, and ZAL.

Based on selected applications in fuselage, wing, and door assembly, the Chair of Production Metrology and Quality Management at the Laboratory for Machine Tools and Production Engineering (WZL) of RWTH Aachen University developed a methodology for selecting large-volume measuring systems for factory-wide measurements in line with requirements. According to the designed methodology, the iGPS was determined as a suitable measurement system, for which a measurement uncertainty model was subsequently developed. With the help of the model, a measurement uncertainty for position measurements can be determined depending on the spatial distribution of iGPS transmission units. This can be used to evaluate a-priori whether the measurement system is capable of checking a given tolerance. Based on this, an optimization algorithm was developed that determines an optimal distribution of the transmitting units over the assembly area while minimizing the measurement uncertainty. A model-based approach allows the consideration of different measurement systems (e.g. iGPS or laser tracker) in the optimization.

The large-volume measurements initially cover the entire relevant assembly area but cannot measure positions in concealed areas such as inside the cabin due to optical signals. The Fraunhofer IFF developed special local sensor technology for precisely these critical areas, which can be used, for example, to measure the flatness of the car floor during assembly. To make this measurement data available factory-wide, a Kalman filter-based method was developed that transfers the local measurement data into the coordinate system of the large-volume measurement system. In addition to the measured value, the measurement uncertainty is also transferred so that an overall measurement uncertainty can be collected as a result of the merged measurements. Two main results were achieved by this: First, all position data relevant to final aircraft assembly can be referenced to a coordinate system factory-wide, which enables a holistic evaluation of the assembly condition and component quality over large component dimensions. On the other hand, the consideration of the measurement uncertainty of the interlinked measurement systems allows a higher-level evaluation of the process capability and an associated conclusion on the testability of tolerances.

The methodology developed in the project was successfully validated on real Airbus components and a demonstrator for aircraft fuselage assembly in collaboration with the Fraunhofer IFF. Future steps will deal with the utilization and further development of the results in aircraft final assembly production operations and in the research field of lineless mobile assembly systems at the WZL.