You Are Here: Improved Performance on the Shopfloor

Improved Performance on the Shopfloor

The digitized working world is not only found in offices, but also in production halls, where people work together with complex systems. To control these systems, companies usually use key performance indicators, such as throughput times or error rates. Over the past three years, the now completed research project "Human-Centered KPI Approach for Shop Floor Performance Improvement" (HUMKareS) of the Laboratory for Machine Tools and Production Engineering (WZL) of RWTH Aachen University and Koblenz University of Applied Sciences has addressed the question of how a KPI system tailored to employees can contribute to motivation and thus to increased performance on the production floors. The final report has now been published.

The aim of the project was to enable small and medium-sized enterprises to digitally record performance on the store floor - i.e. directly on-site in production - and to optimize it in a targeted manner. The key figures were to be prepared in such a way that the workers can easily absorb them and that their performance is positively influenced as a result - but without them perceiving this as a monitoring tool. Rather, the communication of the key figures should make production processes more transparent and thus help to further improve working conditions.

In order to explore and investigate this, the two research centers were able to win ten companies from the region as cooperation partners. In addition, other companies participated in the research project by filling out questionnaires and conducting expert interviews. Vocational schools from Rhineland-Palatinate and North Rhine-Westphalia were also involved. Their classes simulated the production processes under supervision in business games and thus also contributed to gaining knowledge.

From the Koblenz University of Applied Sciences, the project was led by Prof. Dr. Bert Leyendecker from the Department of Economics. The research team was completed by his research assistant Jasmin Ohlig and his colleague Dr.-Ing. Patrick Pötters - meanwhile professor for production management at the Ostwestfalen-Lippe University of Applied Sciences. At the participating companies, the research team examined the current status and needs with regard to the use of key figures on the store floor. Are there possibly already systems in place there that communicate the key figures? Which key figures are considered to be useful? For this purpose, both the management of the respective companies and the workers were interviewed. "Our project is not only about the pure key figures, but also about leadership culture," emphasizes Leyendecker, "according to our understanding, leadership should take place at the place of action. The supervisor takes on the role of a coach who gets the workers to be able to solve problems in production on their own." The term "performance" is deliberately defined more broadly and includes factors such as employee satisfaction and absenteeism in addition to the classic factors such as profitability and quality. 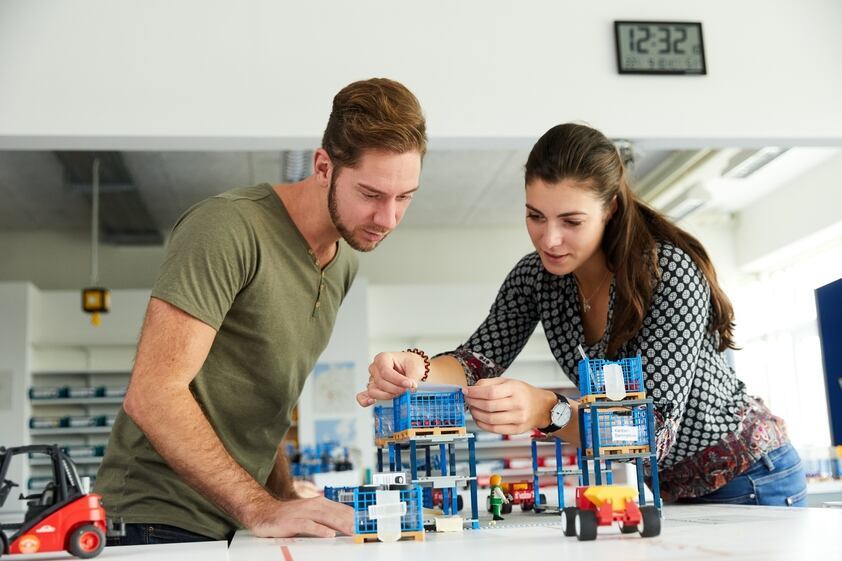 In addition to the targeted selection of the key figures to be recorded, the interdisciplinary team led by Prof. Dr.-Ing. Robert Schmitt, Dr. phil. Ina Heine and Thomas Hellebrandt from the WZL at RWTH Aachen University worked on visualizing these and linking them with playful approaches to increase the motivation of the worker. "Gamification" is the scientific term for these systems, which use playful incentives to boost performance. In the research project, this gave employees direct feedback on their work performance, enabling them to adapt to the situation in a self-determined and targeted manner. Students and production employees tested the developed performance indicator system and the gamification approach in a practical setting with the help of the Koblenz model factory. "The central goal of the research project was to design an integrating, motivation-promoting KPI system for the target group of workers, which was ultimately to be developed as modular software in the form of an app and tested in practice," says Thomas Hellebrandt from the WZL.

Due to delays caused by the Covid-19 pandemic, the project was extended by six months. In addition, the research team also had to be flexible in the way it collected data in response to the circumstances. "After the outbreak of the pandemic, we were no longer able to go to the companies to continue conducting our simulation games there and to check our research results more intensively," explains research assistant Jasmin Ohlig, "we then placed a stronger focus on interviews with the experts." In order to delve deeper into some aspects after all and improve the app developed, the team has now applied to conduct a follow-up project.

"In this research project, the cross-sector collaboration of the project participants from scientific research institutes, companies and company social partners has proved very successful,"

This also applies to the interdisciplinary composition of the scientific project team on the part of the research institutes: "The scientific employees involved have a specialist background in the fields of economics, (industrial) engineering, and psychology. Thus, the problem was viewed from different perspectives and worked on with the help of complementary competencies."

Initiators of the project, which is funded by the German Federation of Industrial Research Associations (AiF) within the framework of the program for the promotion of Industrial Cooperative Research (IGF), are the Chair of Production Metrology and Quality Management of the Machine Tool Laboratory WZL at RWTH Aachen University and the Research Chair of Production Economics of the Department of Economics at Koblenz University of Applied Sciences. The project was coordinated and supported by the Forschungsgemeinschaft Qualität e.V. (FQS).

The final report and further information are available on the website of the project.