You Are Here: Great success for WZL and TIME of RWTH Aachen University at the AI Innovation Competition of the Federal Ministry for Economic Affairs and Energy

Copyright: © senseering / Daniel Trauth On August 30, 2019, representatives of the SPAICER consortium successfully defended the concept to the ex-perts of the AI Innovation Competition in Berlin under the direction of Prof. Wolfgang Maaß.

Production companies struggle with disruptions every day. These can be external disruptions, such as delays in logistics, shortages of raw materials or politically motivated trade barriers, but also internal disruptions, such as illness, broken tools or production stops. Artificial Intelligence (AI) is now intended to help companies to adapt flexibly to such internal and external disruptions. The AI flagship project "SPAICER – Scalable Adaptive Production Systems through AI-based Resilience Optimization" was selected as a central component for the implementation of the German Federal Government's "Strategy Artificial Intelligence", in which the two institutes WZL and TIME of RWTH Aachen University are also involved.

SPAICER will be part of the implementation of the international trademark "AI made in Germany", which stands for modern, secure and public benefit oriented AI applications based on the European canon of values. Together with leading researchers and production companies, the SPAICER project is investigating how artificial intelligence methods can be transformed into resilience management for industry. This should enable a better preparation and reaction to internal and external disturbances.

More than 130 consortia from science and industry had submitted concept ideas for the innovation competition "Artificial Intelligence as a driver for economically relevant ecosystems" of the Federal Ministry of Economic Affairs and Energy (BMWi). Fifteen consortia were finally selected – including the SPAICER consortium, which is now funded with more than ten million euros for three years under the direction of Prof. Wolfgang Maaß (DFKI).

In concrete terms, SPAICER is about developing an ecosystem and a platform for smart resilience services to strategically improve the resilience of the production industry.

Besides the WZL, the DFKI, the University of Freiburg, the Technical University Darmstadt, the Institute for Technology and Innovation Management at RWTH Aachen University (TIM), the Otto Beisheim School of Management (WHU), deZem, Feintool, SAP, Schott, Schaeffler, Seitec, senseering and Waelzholz are involved in SPAICER. Furthermore, 39 associated partners support the project consortium with important practical knowledge. 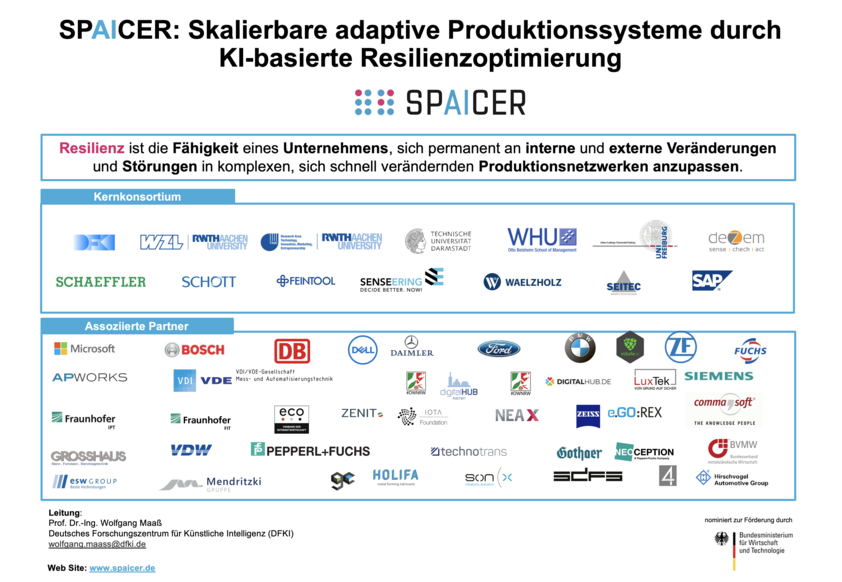 In psychology, resilience describes a person's ability to handle critical situations or quickly return to a state prior to those critical situations. Resilience therefore exists when people use or develop processes, methods and behaviors that protect them from possible negative and lasting effects of stressors.

In production, resilience therefore is understood as a company's ability to adapt permanently to internal and external changes and disturbances in complex, rapidly changing production networks. This research on resilience management is driven, among other things, by the growing complexity and fragility of an Industry 4.0 production, the volatility of political, economic and ecological contexts, uncertainties in the supply of raw materials and, last but not least, by demographic change and increasing qualification requirements.

The SPAICER project aims to develop a framework model for AI-based resilience management for production companies in production networks. Based on hybrid AI platforms and accompanying developed economic and legal usage concepts, the foundation for ecosystem smart resilience services for different stakeholders will be created.

When it came to project definition, the Laboratory for Machine Tools and Production Engineering (WZL) of RWTH Aachen University was able to rely on its own sad past: During the night of February 5, 2016, approximately 2,500 square meters of the WZL machine hall burned down completely. What had lasted 110 years up to this point in time had completely disappeared within just a few hours. The damage was estimated at about 100 million euros.

Even today, three years after the catastrophe, the WZL has not returned to normal operation in certain areas. In the future, projects such as SPAICER should enable standard operation to be achieved much more quickly, regardless of whether it concerns a broken tool shortly before the end of workday or major events such as fires.

Professor Thomas Bergs, head of the Chair of Manufacturing Technology at WZL

In particular, fine blanking technology is a major research object of the WZL. The resilience of fine blanking contractors is to be increased using the example of disturbances that occur in the value-added chain of this technology. Fine blanking is used, for example, as a mass production process for safety-critical components for automotive, aerospace and medical technology. Here, not only malfunctions occur at the micro level, such as the breaking of a tool, but also particularly within the entire supply chain (meso level), such as varying material qualities or logistical challenges. An industrial working group on fine blanking supports the works on the „Demonstrator Fine Blanking“, a large machine funded by the German Research Foundation (DFG), with valuable practical experience. This ensures practical implementation in industry. The interim status of the modified demonstrator will be presented at the 30th Aachen Machine Tool Colloquium AWK on May 14 and 15, 2020.

The SPAICER project was nominated for funding by the BMWi at the beginning of September 2019. The DLR is project manager of the project.