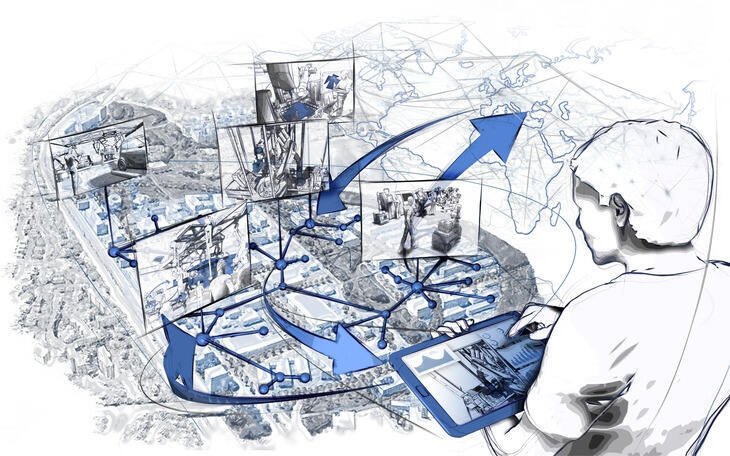 The vision of the Internet of Production: The World becomes a Lab

The last few years were unexpectedly still completely under the influence of the Corona pandemic, so that in addition to the core topic of "digitalization", the topic of resilience also took on an important role within the framework of the Cluster of Excellence Internet of Production (IoP). Digital solutions, online conferences and meetings, rapid rethinking and flexibility characterized day-to-day business and thus enabled research activities to progress seamlessly.

The fact that everyday production also had to be reshaped for the economy with lockdown measures, capped supply chains and home office obligations in many industries also brought new perspectives to the activities of the IoP. Topics such as mobility, material availability, and the accessibility and usability of workspaces alone, as well as, of course, possibilities for data availability and use, have made their relevance and topicality even more visible and intensified as the pandemic has continued.

Since 2019, around 200 scientists in the IoP cluster of excellence have been working together with more than 35 professors from fields including production engineering, computer science, materials science, economics, labor science, and psychology on the shared vision of innovatively rethinking and effectively advancing "Industry 4.0" across disciplinary boundaries and for industrial practice. Until 2025, the IoP will focus on shaping the production of tomorrow: starting with a digital infrastructure for data-driven industrial production in order to consider the complete range of core topics in production technology. 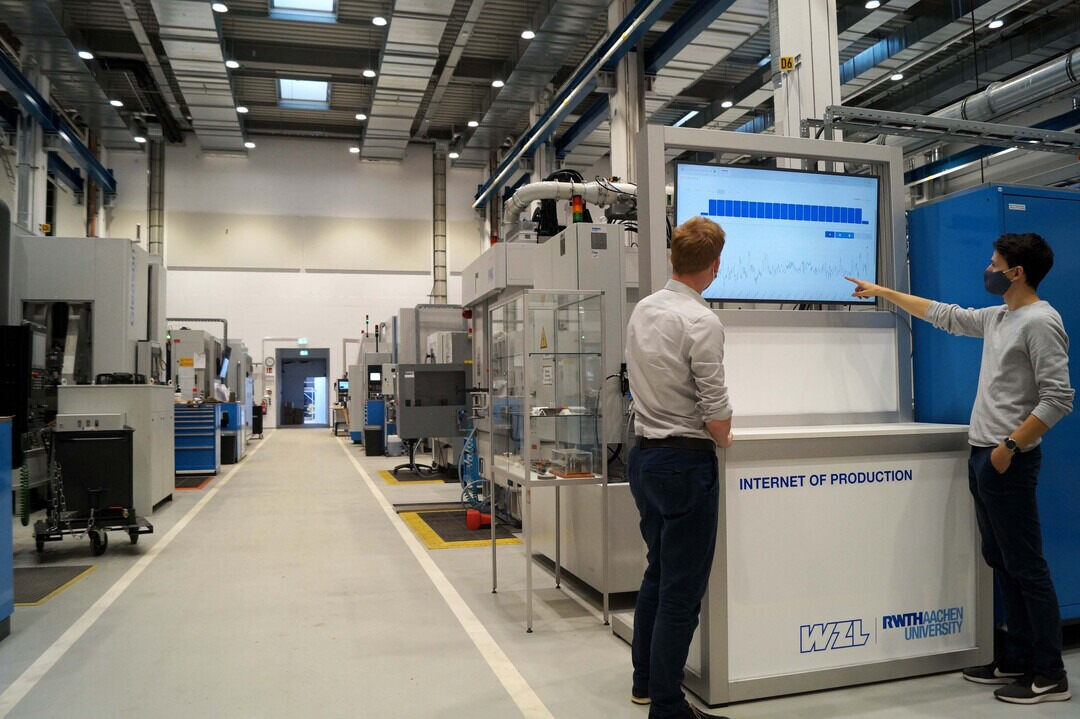 With the so-called "Digital Shadows" developed here, which serve as containers for "Smart Data" and the new cross-domain and cross-industry infrastructure, the increase in cooperation productivity is to be enabled within and between the complex domains - production, development and utilization. In particular, the interdisciplinary challenges, including the integration of production engineering models into data-driven machine learning, will be advanced in Aachen in the coming years. With regard to the economic efficiency of a production of the future, the IoP sees innovative approaches in its vision with regard to the multitude of already very mature highly specialized technologies, but also the electrochemical processing of materials or, for example, in the field of additive manufacturing and already starts with factory and production planning up to the usability of smart data in the context of new business models.

Innovative Examples of IoP Research at the WZL

The variety of production technology topics that can be found on the part of all four chairs of the WZL in all research areas of the IoP is large. And even if the topic of digitization owes the fact of not being particularly tangible, the contents are validated in a practical way using numerous demonstrators. The "Connected Job Shop" use case, for example, illustrates the development of a methodology for networking different production processes at store floor level. The concrete example of a classic production process is the use case "Fineblanking". It vividly illustrates the principle of IoP, which is to take an interdisciplinary and "digital" look at classic engineering approaches as well as models and processes in the context of a digital transformation in order to tap into previously unknown cause-and-effect relationships. The aim is to identify quality fluctuations and faults, to reliably predict the significance of the lifetime of a component and the causes of this (predictive maintenance). 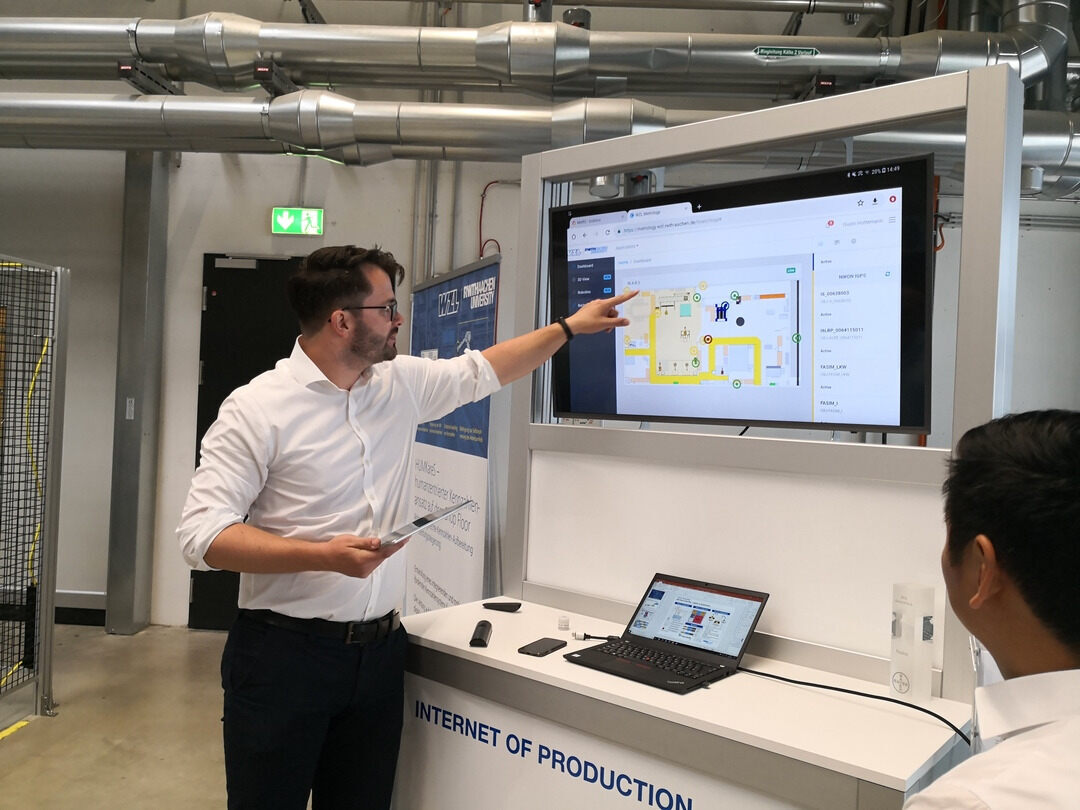 © Anja Wassong IoP Research in the M.A.R.S. Lab at the WZL

The work of the use case "Future Assembly" in the M.A.R.S. (Metrology, Assembly and Robotic Systems) infrastructure, where the production-integrated use of intelligent sensor technology within various test benches is demonstrated, is also vivid and visible on site at the WZL. Here, the realization of flexible and autonomous assembly systems is being worked on. The goal is to manufacture industrial products and product families in networked assembly systems that, like software, scale quasi-continuously. Central elements are so-called multipurpose resources, such as stationary and mobile industrial robots.

The use case "Physical Infrastructure Supporting Digital Shadows" deals with the basic infrastructure and the concept of the digital shadow. Here, a service-oriented sensor interface is developed that enables automated integration of new sensors into the infrastructure of the Internet of Production. In this process, the data provided by the measurement systems is fed into existing machine learning algorithms and the so-called data lake after standardization at the interface and model level.

National and International Visibility of the IoP

The visibility of Cluster of Excellence research has increased significantly in the past years - despite or even due to Corona - the focus on global topics, problems and innovative solutions increased increasingly. This can be seen most recently in the steadily growing interest from industry and the expansion of the Industrial Advisory Board. In addition to the global players in terms of Industry 4.0 with global corporations such as BMW, Airbus or Siemens or even Microsoft or AWS are established in the list of well-known companies along the entire supply and value chain in the IoP. Recently, further innovative partners were found and the portfolio was expanded and strengthened with Henkel, Scheidt & Bachmann, John Deere or most recently VOITH, Gerresheimer and SAP, among others.

Even if, due to the pandemic, the large meetings had to be held on an unusually small scale in digital form only, the scientists were still able to "digitally" show their presence and set impulses at numerous conferences around the world and thus further expand the visibility of the IoP and its scientific clout and set accents.